Home / Trivia Games and Apps / Here are All 5 Versions of Jeopardy! for Xbox

Jeopardy! is a popular game show that has lasted on TV for several decades. The show has been facing a bit of a rough patch after the passing of the fan-favorite full-time host Alex Trebek. For now, it seems the show has found two new hosts, finally putting an end to months of controversy surrounding the showrunners.

One of the most appealing aspects of watching a TV game show has always been shouting out the answers, along with the contestants. Even if you’ve never felt confident enough to scream the answers, you can still follow the contestants and analyze their behavior. Many long-time viewers even try to get on the show themselves!

The bad news is—getting on the show is very difficult. The good news is—you can recreate the show in your own living room! We’ve already discussed the various Jeopardy! board games and video games that are available, but this time we’re going to focus on one platform in particular. With one of these Jeopardy! games for Xbox, you can easily try yourself in the role of a Jeopardy! contestant. All you need is an Xbox and some friends to play with.

The latest Jeopardy! Xbox game, Jeopardy! PlayShow, came out in the middle of the pandemic, which almost guaranteed its success. The game allows you to play against your friends in real time. You can choose from different game modes to recreate the game show experience in your living room. Little details like wagers and daily doubles make the game even more realistic. You can also submit your answer using your voice, just like the contestants on the show. Don’t forget to buzz in first!

All the questions in the game have actually been featured on episodes of Jeopardy!. You might have an advantage if you watch the show religiously. You can choose from the selection of episodes; go based on category, season, or tournament type. The game is suitable for PC, Xbox One, and Xbox Series X|S. It was published by Sony Pictures Games in 2020.

This Jeopardy! game developed by Frima Studio and published by Ubisoft is suitable for Xbox One and Xbox Series X|S. There are different game modes that you can explore to recreate the game show experience. Classic mode is equivalent to a classic game of Jeopardy! as we know it from the TV game show. Quick mode is a shorter version of the same game for when you don’t have time to play a whole classic game. Family mode is designed specifically for families, with family-friendly categories and clues. Even the youngest members of your family can play!

There are over 2000 clues in the game, including audio and visual questions. Keep playing to get to the next level and unlock more clues and categories.

This 2017 version of the aforementioned Jeopardy! game for Xbox came out in 2017. The game was meant to be played on Xbox One and Xbox Series X|S. One outstanding detail that makes this game worth the money is the full HD quality. The developers created an unforgettable experience for all Jeopardy! lovers. The game features over 2,000 questions (or clues). You can play with friends and family, or find random opponents to compete against online. The game was developed by Frima Studio and published by Ubisoft. 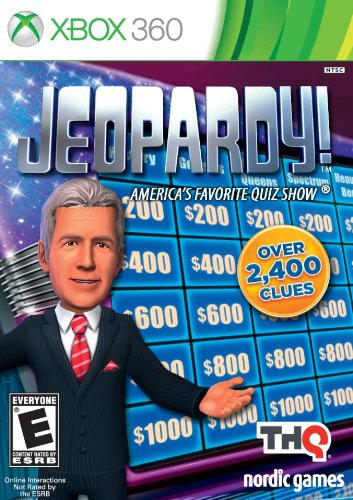 As one of the earlier Jeopardy! games for Xbox, this game is similar to the Jeopardy! app for mobile devices. The graphics are not as good as in the newer games, but this game is still one of a kind. The game features over 2400 clues from Jeopardy!. You can choose from a variety of game modes: Classic, Solo, and Tournament of Champions. The game even offers you to take a contestant exam before you get on the virtual stage as a “real” contestant.

This game is widely considered a classic. All the clues are read in Alex Trebek’s voice, which has always been fitting and became a little nostalgic after his untimely passing. There are three levels of difficulty, so you can adjust the game to your knowledge and experience. Even though there are more technologically advanced games now, Jeopardy! Xbox 360 will forever remain a great game. If you ever come across it, give it a go!

Is Jeopardy! on Xbox Multiplayer?

There is nothing more fun than playing with your friends. Knowing who you’re playing against makes the game a lot more real. Being in the same room as your opponent adds to the atmosphere of the game show. Luckily, Xbox was built for playing with friends. You can enjoy the multiplayer functionality of these Jeopardy! games if you have an Xbox subscription. The subscription is sold separately.

Can You Play Jeopardy! With an Xbox Emulator?

You can try playing Jeopardy! on your PC with an Xbox emulator, but it might be a rocky experience from start to finish. First, find a decent emulator and download it on your computer. Keep in mind that emulators are complex programs that need a lot of power to run somewhat decently. Once you try playing the game through an emulator, the quality will diminish dramatically.

Most people don’t recommend the experience, as the low quality would probably ruin your impression of the game. My advice is—save yourself the trouble and enjoy these Jeopardy! games in wonderful quality on your Xbox.

Playing Jeopardy! on Xbox allows you to teleport to that famous stage through your TV screen. If you’re looking for a realistic game show experience, check out one of the games mentioned above. Keep in mind that playing with friends is even more fun. Invite some people over and recreate a real Jeopardy! battle from the comfort of your home.

Have you played any of these games? Which one is your favorite? What do you like about Jeopardy! for Xbox games? Please share your opinion with us in the comments!